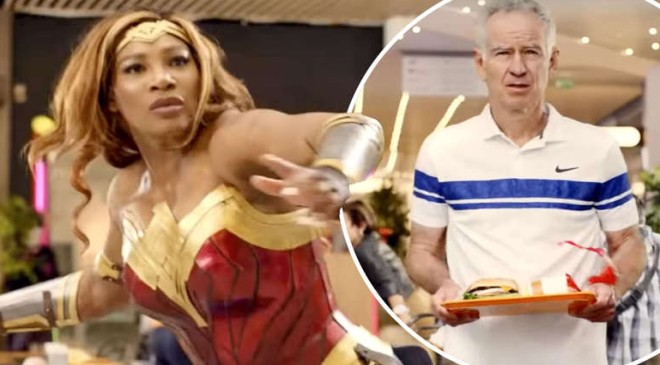 Serena looked incredible in the replica of the outfit, donning a red and gold corset-style bustier and blue skirt as she pounded the balls back across the mall.

She completed the look with the classic gold knee-high boots, a gold head piece and had a rope attached to her waist.

In the advert, a couple is seen testing out a Direct TV feature that lets them watch live TV and on-demand content together.

The couple switches between Williams’ tennis match and Wonder Woman 1984, but as they do, Williams transforms into the superhero herself.

She then saves the mall from evil tennis ball-shooting machines.

The film, once again starring Gal Gadot as the Amazonian hero Diana, was one of the many projects to face delays due to the COVID-19 pandemic and ultimately received a hybrid release both in theaters and on HBO max.

Williams’ new advert comes just under a week after she announced that she would not be competing in the upcoming US Open tournament.

The star athlete made the news about her decision public through a post made to her Instagram account last Wednesday, where she let her nearly 14 million followers know exactly why she was not going to compete.

The tennis great began her message by letting her fans know that her absence from the tournament was due to a continuous process of recovery.

It read: ‘After careful consideration and following the advice of my doctors and medical team, I have decided to withdraw from the US Open to allow my body to heal completely from a torn hamstring.’

Williams also expressed that she was sad about missing out on all the excitement of the sporting event, although she offered her support to the competitors.

‘New York is one of the most exciting cities in the world and one of my favorite places to play – I’ll miss seeing the fans but will be cheering everyone on from afar,’ she noted.

The social media personality concluded her message by expressing her gratitude for all of the well wishes she has received during her recovery process.

‘Thank you for your continued support and love. I’ll see you soon,’ she remarked.

Williams previously tore her hamstring while competing in the most recent Wimbledon tournament.

Fellow tennis champions Rafael Nadal and Roger Federer will also be absent in the forthcoming set of matches, as they are both recovering from various injuries.

The Olympian has been one of the tournament’s fixtures for over two decades and has won numerous titles while competing with other athletes.

The athlete’s first appearance at the Women’s Doubles portion of the event came in 1997, and she won the Women’s Singles tennis title during a match with Martina Hingis two years later.