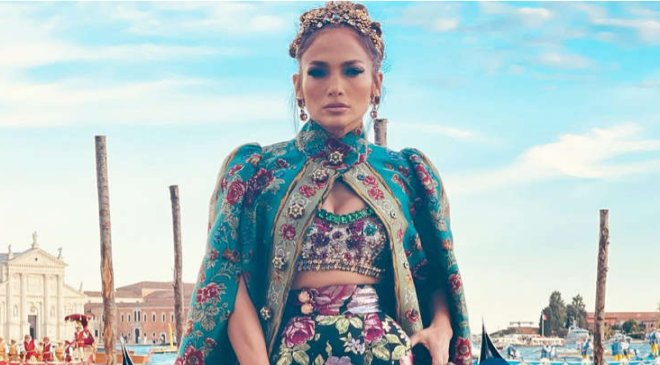 Jennifer Lopez is having another fashion moment!

The “Let’s Get Loud” singer, 52, attended the Dolce & Gabbana fashion show in Venice, Italy, on Saturday, rocking a regal, floral-print ensemble from the designers — complete with a matching cape and embellished headpiece.

Lopez modeled the glamorous outfit from all angles in a series of posts on Instagram, including close-ups of her hair and makeup courtesy of Chris Appleton and Mary Phillips. “That runway show glow ✨👸🏽 @DolceGabbana @JLoBeauty,” she captioned a video showing her strutting toward the camera.

Recently, Lopez and boyfriend Ben Affleck have been spending more time together with their families, taking a trip with their children to the Magic Castle in L.A. last week.

The couple was accompanied by Affleck’s three children with ex-wife Jennifer Garner: daughters Violet, 15, and Seraphina, 12, and son Samuel and Lopez’s twins, Emme and Max, 13, whom she shares with ex-husband Marc Anthony. Affleck’s mom also joined the group for the family weekend.

“Since Jennifer and Ben are in it for the long run, it’s just a natural step that they all spend time together with the kids,” a source previously told PEOPLE.

“They are not trying to rush anything, but they want all the kids to get to know each other,” the source added. “They are making the last few days of summer as fun as they can.”

Following their respective splits from Alex Rodriguez, 46, and Ana de Armas, 33, Lopez and Affleck rekindled their romance in late April.

They originally began dating in July 2002 after meeting on the set of the movie Gigli. The pair went on to get engaged that November before postponing their September 2003 wedding and ultimately calling off their engagement in January 2004.

A source told PEOPLE in May that their relationship is different this time around. “Time has passed, and they are each in a different place with children,” the insider said.