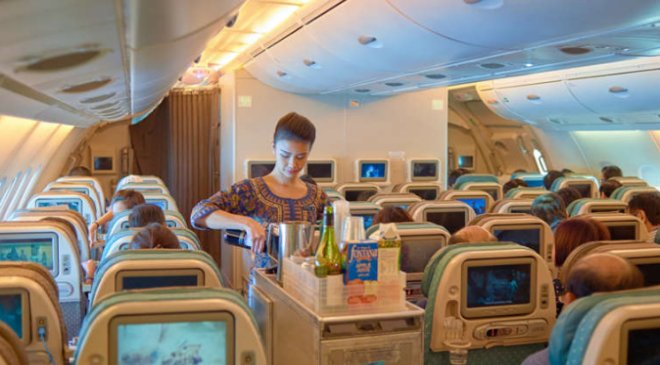 I love a good in-flight drink. There’s nothing better than settling into a business class seat after a long work-day and jetting into the night with a frosty beer or gin-and-tonic. It’s the classic start to vacation for me and many other travelers — some of whom are up in arms about British Airways’ decision to ax the beverage cart on select flights.

That’s right. British Airways will eliminate beverage carts on its short-haul flights. Instead, passengers will need to pre-order their favorite drink online or use a mobile app for in-plane ordering. According to Daily Mail, some BA flyers are calling it a service reduction. BA responded saying it will help the airline cut down on food waste and aircraft weight.

While I never advocate for a reduction in airline service, I think BA is in the right here. It’s time for beverage carts to go the way of the in-flight phone, but not to help the airline. Instead, it’s in the passenger’s best interest for the airline to embrace a contactless future with remote ordering — here’s why.

It frees up the center aisle

We’ve all been there. Shortly after takeoff, the coffee you had at the lounge catches up with you. You need a bathroom — stat — but manage to hold off until you reach cruising altitude. The seatbelt sign is turned off, you ask your neighbor to move and make your way down the aisle. Only one problem: drink service. The single-aisle A319 that’s whisking you from London to Paris is already small enough, and the beverage cart in front of you isn’t turning around any time soon as it makes its way to the front of the plane.

I’ve been in this situation a handful of times during my years of travel experience, but it doesn’t have to be this way. By removing the beverage cart and replacing it with a mobile app, we wouldn’t need a cart running up and down the aisle and blocking access to the bathroom. Instead, a flight attendant can simply bring drinks to each row and skip the rows who don’t want a drink.

Further, beverage carts and turbulence don’t mix. Moving to a digital solution would keep passengers out of harm’s way if a plane unexpectedly hits rough air, sending drinks (and possibly the cart) airborne. Keeping this massive hunk of metal out of the aisle is good in more ways than one.

It’s that simple to fix a major pain point — one that many of us will appreciate at some point in the future.

No more sleeping through drink service

Other times, you get on the plane after a long day and fall asleep mid-way through take-off. You wake up an hour-and-a-half later craving a cup of tea, only to have missed the beverage cart 20 minutes ago. Now, you have to wait for the flight attendant to finish making their rounds, walk to the back of the plane and ask for it.

This wouldn’t be an issue if all orders were digital. Pre-ordered drinks would simply be left on the snoozing traveler’s tray table. Or, the traveler could order said drink once they’re in the sky. This is a much less frustrating experience than sleeping through the food and beverage service.

One thing I liked most about now-defunct Virgin America was the ability to order food and drink from the seat-back screen. It made the process of ordering food and drink feel so much more seamless. Sure, there are aspects of the “human touch” that are lost, but it’s much easier and less confusing to order from a touch screen.

Plus, this just makes sense in the coronavirus era. Fewer people talking and moving about the cabin is good for all of us. Using your personal device to order and pay for a drink is far safer than speaking to a flight attendant, handing him or her your credit card and then signing on a shared iPad.

In a similar vein, since flight attendants aren’t serving each and every row, they can spend more time on other tasks. I think that this will ultimately lead to faster and more prompt service across the board, as those who want a beverage will get them faster.

We’re headed toward a beverage cart-free world, and I’m all for it. I love a good in-flight drink, but look forward to the day I can order it on my iPhone instead of waiting for someone to come around with a cart. It will make the experience faster and safer, all while clearing out the center aisle for runs to the bathroom.