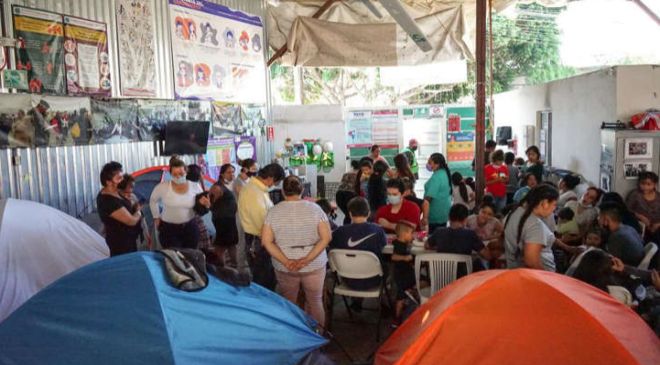 Democratic lawmakers and immigration advocates are pressing Joe Biden to take new steps to end an immigration policy begun by his predecessor, Donald Trump, after the US supreme court ordered that the controversial “Remain in Mexico” program be reinstated.

The policy put in place by Trump, forced thousands of asylum seekers to stay in Mexico to await US hearings, instead of being allowed to cross the US-Mexico border and follow their legal process, which can take years to play out, on American soil.

In one of his first acts as president in January, Biden ended the policy, formally known as the Migrant Protection Protocols (MPP).

The conservative-majority supreme court on Tuesday ordered that Biden must comply with a Texas-based federal judge’s ruling to revive the program, although federal officials retain some discretion on how to do that.

Authorities in the Republican-led states of Texas and Missouri had challenged Biden’s ending of the program, saying his administration failed to follow the correct legal process.

The MPP was a cornerstone of Trump’s hardline immigration policies. Biden promised what he called a more humane approach to immigration.

The US Senate foreign relations committee chairman, Robert Menendez, a New Jersey Democrat, called on Biden’s administration “to curtail and put a lawful end to the implementation of this disgraceful policy”.

Lucille Roybal-Allard, a Democratic US Representative for California, also urged the administration to roll back “an inhumane policy that forced asylum seekers, including women and children, to wait in dangerous border cities, placing them in greater risk of exploitation by cartels and criminal organizations”.

Marielena Hincapié, executive director of the Los Angeles-based National Immigration Law Center, said the administration should determine how to comply with the court’s order while still trying to end the program.

“We continue to believe that it was unlawful,” Hincapié said. “It caused severe damage and chaos and disorder.”

The US government has already been in touch with Mexico over the issue, a senior Mexican foreign ministry official, Roberto Velasco, said on Twitter, calling the judicial process a “unilateral measure” by the US.

Mexico is not bound by the court’s decision and will exercise sovereignty over its migration policies, the Mexican foreign ministry said in a statement.