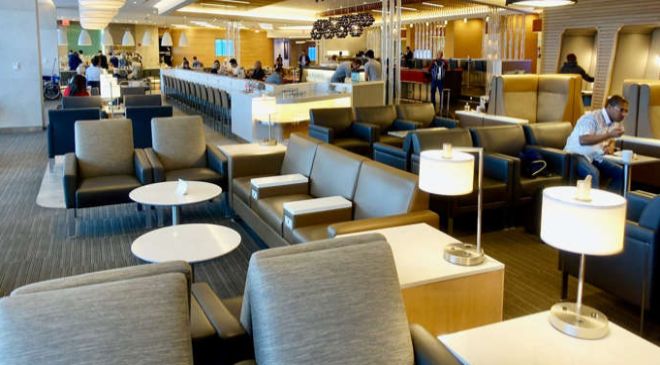 American Airlines is another step closer to restoring pre-pandemic levels of service.

As we reported in June, the airline will begin reopening its premium Flagship Lounges in September. Now we know which lounge will be reopening first and have an exact date. The move follows a nearly 18-month closure after AA first shuttered the entire premium lounge network on March 20, 2020.

Come Sept. 14, American Airlines will once again be welcoming flyers to its New York-JFK lounge. The carrier was originally planning to reopen its Miami (MIA) lounge first, but that’s no longer the case. The MIA lounge is now set to open on Sept. 28, followed by the airline’s three other outposts later throughout fall 2021.

In addition to its Flagship Lounges, the airline will also reopen its Flagship First Dining locations. These outposts are essentially a lounge-within-a-lounge, offering a seated restaurant-style dining experience — with Krug champagne available, before the pandemic — to those ticketed in long-haul or premium transcon first class on AA’s three-cabin jets. Flagship First Dining at JFK will reopen on Sept. 16, while the MIA location will reopen on Sept. 30.

American Airlines is also offering news ways to access the Flagship Lounge. More specifically, customers traveling to Hawaii in Flagship First and Flagship Business will be able to access the Flagship experience. Hawaii flights with seats ticketed as Flagship include flights from Dallas/Fort Worth (DFW) to Honolulu (HNL), Kona (KOA) and Maui (OGG); Chicago (ORD) to HNL; and Charlotte (CLT) to HNL.

Up until now, accessing the Flagship Lounge required either a first- or business-class ticket for long-haul travel on AA or its Oneworld partners, or on a qualifying premium transcon ticket from JFK to either Los Angeles (LAX), San Francisco (SFO) or Orange County (SNA) or between LAX and Miami (MIA) or Boston (BOS)

Finally, the carrier teased some exciting updates to its soft product in the lounge. It’s restarting its partnership with the James Beard Foundation to serve chef-driven regionally inspired menu items — both in the main lounge and Flagship First Dining. Further, shower suites now feature Dyson Supersonic hair dryers and bathroom amenities will soon be provided by D.S. & Durga.

As the pace of vaccinations ramps up nationwide and more countries reopen to vaccinated travelers, American appears to expect an increase in its long-haul international operations, despite focusing primarily on short-haul international for the busy summer season.

Of the U.S. airlines, only American and United offer an elevated lounge experience for their premium-cabin passengers. United’s Polaris Lounge network remains shuttered, with a reopening still up in the air. Delta is rumored to open its first-ever Delta One lounge in LAX in the coming years.